70 years ago the Berlin blockade ended

In Berlin there is an Airlift square, Platz der Luftbrücke.  Where you can see a curious monument ascending in front of the former Tempelhof airport. Berliners call it the rake of hunger, die Hungerharke.  But what is the Berlin Airlift?  When and why did it take place?  And why does it still concern us today?  The juvenile reporters from the Böser Wolf (Big bad wolves) wanted to know more.

In brief: the Berlin Airlift occurred from 26 June 1948 to 30 September 1949. Berlin was divided into four sectors: The westerly zones were occupied by the United States, Great Britain, and France, while the Soviet Union took the zone to the east. 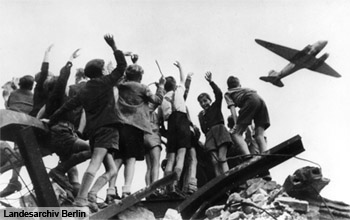 To disagree with the new monetary reform introduced in the three western sectors, the Russians decided to block all land and navigable access routes to West Berlin. To ensure that the population does not starve and has a minimum supply of electricity, the western Allies organised an airlift which provided this part of the city with food, fuel and other indispensable commodities.

Here you can find a short film that will give you more information about the history of the Berlin Airlift. You will maybe be surprised to learn that planes were landing every 62 seconds in Berlin because the West part of the city could only be reached by air. 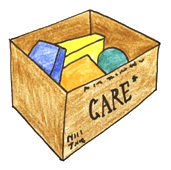 It is a beautiful story of enemies becoming friends. Marion Werwoll, Managing Director of Stiftung Luftbrückendank (Airlift Gratitude Foundation), tells us this story in an interview. Of course, the young reporters from the Böser Wolf (Big Bad Wolf) also talked to eyewitnesses, like Mercedes and Horst, who were children back then. You will learn more about the everyday life in a city that is in need. Berlin needed help at that time and got it. It is a good lesson for today. And don't forget to take our quiz, test what you already know!