How was it to be a kid during the Airlift?

The young reporters from the Böser Wolf (Big Bad Wolf) met with Mercedes Wild who was 7 years old during the Berlin Airlift. She told them about her childhood and an amazing friendship. 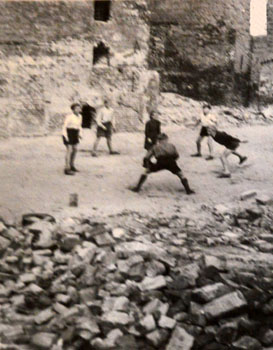 It was normal for us. I grew up in this house, there were also refugees living there. We didn’t have a lot of drinking water. I started school in 1947 and sometimes my school meal was my only meal.
Death was running, we had been bombarded. Outside, there were mountains of ruins and debris. When the Airlift started, the noise of the planes was unbearable, because it reminded me of the time of the bombings. I had a very kind teacher who tried to explain the political situation to us.

She told us that we were locked up by the Soviet Union.  That is why we had less food in the western sectors than before. My grandmother explained that food was being flown in.
At the end of July 1948, not far from here, a plane crashed, the pilot and the radio operator died. We were all very shocked and afraid that the Allies would stop the supply flights to Berlin.

She told us that we were locked up by the Soviet Union and that's why we had less food than before in the West Berlin areas. My grandmother also told me that we were refueled by the air.

That we were trapped by the Soviet Union.  That is why we had less food in the western sectors than before. My grandmother also explains that food has been flown in.
At the end of July 1948, not far from here, a plane crashed, the pilot and the radio operator died, we were all very shocked and were afraid that the Allies would stop the supply flights to Berlin| sending planes to Berlin to supply us.

Then, a little miracle happened. On the way to school, small parachutes came down from the sky. We were even allowed to go out during class if a lot of parachutes had landed in the schoolyard. When a plane arrived with sweets, it wiggled its wings. That was the sign. But I was always too slow, so I was never able to catch  anything.
One day, I came home crying and my grandmother told me: « Instead of whining, do something ».
So I secretly wrote a letter and put it in the mailbox by myself, without any stamps! « To my Chocolate Uncle, Tempelhof Airport »
I wrote to him: “you fly over my house every day, you will recognize it because of the white hens, they do not lay anymore because they are afraid of planes. But when the little parachutes come, everything is alright.” 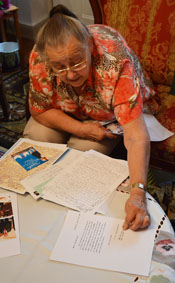 After that, I did not get a parachute, but one day I received a letter addressed to Miss Mercedes Simon. The sender was Lieutenant Gail Halverson. I had seen a picture of him in the newspaper.
I found a chewing gum and a very flat lollipop inside the letter. I didn’t know chewing gum - nor the smell. It was peppermint. I didn’t like this smell. At that time, we had toothpaste without taste. That’s why I exchanged this chewing gum for a little glass ball at the children's black market*, a glass marble that I still own.
I kept the lollipop for Christmas. But the most important thing was the beautiful letter. I told my mother that I wanted to see this man, this pilot, my chocolate uncle, the one who wrote to me.

*Pencils were exchanged for gums, chewing gums for marbles. Everything we found in the ruins that we didn’t want to keep was exchanged.

The end of the story? No, it's the beginning of a long friendship 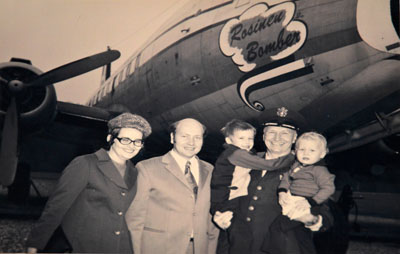 It wasn’t until 1972 that we really met each other. The friendship still exists today, even between the members of both families. At that time, Gail Halvorsen returned to Berlin as Commander at Tempelhof Central Airport, Berlin. The first time Gail came to visit us at our home with his family,; I had prepared a chicken fricassee. Gail asked: "Is it from the hens you told me about?” That's when the ice broke between us.