The Germans were very welcoming

Jean-Claude fulfilled his military service in Berlin between 1962 and 1964 as a member of the French Allied soldiers. He talked to us about the everyday life in the military barracks but also about his encounters with the Germans and in which way this changed his life.

When did you go to Berlin?

I was enrolled by the army on November 3rd 1962. I was 22 years old back then and I had to go to Laon.  After a control at the arrival, I got a military equipment and I had to wear a red armband. At the end of the day, we had to go aboard a special train which carried us to an unknown destination. In the early morning we discovered that we were in Strasbourg. After a few hours spent waiting someone told us that everybody who had a red armband was going to Berlin this very evening! 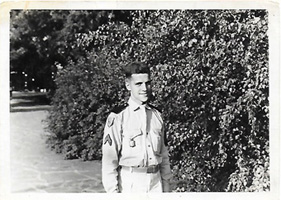 How did you react to this?

I was surprised to go so far away and increasingly worried. The Berlin Wall was built one year earlier and was strengthened everyday.  It was a crucial moment in the Cold War with the Soviet Union. And all around Berlin there was East Germany! I would not go back home soon! I went to a region where all the international conflicts gathered.

At the beginning of the day we noticed that we were going through a corridor in East Germany to reach West Berlin. Russian soldiers guarded our train when we stopped. Some of them asked for cigarettes or souvenirs in exchange for medals. It seemed to be easy to talk to them.

How were your first impressions?

The French military orchestra waited for us on the track and started playing when we arrived.  This feeling of being expected was very pleasant, but at the same time also worrying. Why were we pampered like this? Was it going to be a difficult mission?

Could you describe your everyday life at the barracks? 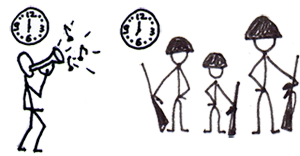 We woke up at 6am because of the bugle. Then we had breakfast and after that we had to run, do physical training, deal with weapons and do military maneuver. There was a strict discipline. There were often alerts during the night, then you had to wake up and stay aligned in the court for one or two hours. We never knew if it was only a test or if we actually had to leave.
Five months after my arrival, a friend of mine who was a musician asked me if I wanted to be a member of the orchestra. I played tenor saxophone. My life as a soldier changed then as I focused more on music: in the morning we played individually, sometimes in groups, and in the afternoon, there were orchestra rehearsals. It was less of a military life. 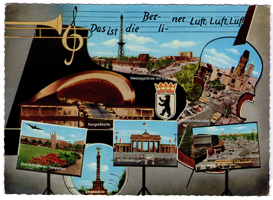 Did you go out in Berlin?

Yes, we did during the weekend. We were immediately welcomed. When we went to a café, the Germans asked us to pay instead of us and wanted to talk with us. We visited the town every Saturday afternoon, especially the city-centre and the Kurfürstendamm. We also went to see the Wall at the Brandenburg Gate, the castle of Charlottenburg and the Dahlem Museum.

For the first Christmas Eve we could choose between going to the American military camp or to the British base. I went to the Americans. I remember that I drank milk since there was no alcohol even during celebrations like this.
We could also meet German families who were ready to host us. We could not go back to our families in France as it was far away, and we would have had to go through East Germany. It was an opportunity to share some family life, therefore I applied for it. 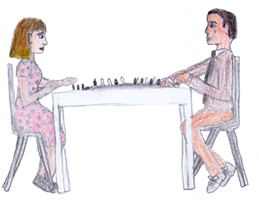 That is how I met my first German family, who was very well-mannered, and we shared many discussions at the family table. The parents were teachers and had a twenty-year-old girl, Ingrid, who was a student and who learnt French. Every two weeks I was invited on Sunday afternoon at 4pm. After the tea-time with delicious cream cakes, I played board games with the girl. I didn’t speak German very well and the girl tried to speak French. Therefore these were not complex discussions and we mainly talked about our families and traditions. We did not talk about politics. In the first years after my return in France we sent postcards to each other each end of the year.

Were there other important events? 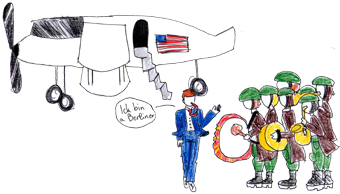 Yes, I had the “privilege” to be at the airport with the military orchestra on June 26th 1963 to welcome John F. Kennedy who was visiting Berlin. There were also Konrad Adenauer and Willy Brandt. It was a unique moment which became historic.

What do you memorize of this period?

It was an essential period of my life. It was easy to meet Germans since they were very open-minded towards us. It was touching to see that they wanted to build intense relations with us. However, I wish that there was the same feeling on the French side. When I came back to France, many people did not understand how I could have such a bond with Germany and its inhabitants.

Today I still keep inside of me this very strong relation with the inhabitants of Berlin. I also remember the exceptional event of Kennedy’s visit to Berlin.
I went back to France on February 27th 1964, free of any military obligation but at the same time I was sad that I had to leave my German friends and in particular my Berlin “Mum”.

Did the Allies play a decisive role in bringing people together?

Yes, thanks to that the people got to know each other and to see the other as an equal person. This feeling of getting closer to another happened in Berlin when we saw each other in the street, when we went to drink something together or, as I did, when we were invited to share a family’s life. If the Allied’s presence were only a military presence and the soldiers had stayed in their barracks, 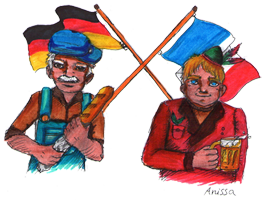 then no friendship would have come into existence. The very strong desire of meeting again during the following years is due to the welcoming attitude of the Berliners. Maybe the development of town twinning between French and German cities is also due to the Allied presence? Nowadays Europe tries to unite the people, but we should not forget that eventually it is every country’s citizens who contribute to friendship and peace by meeting each other.