At the Allied Museum in Berlin

From library and theatre to museum

Bernd von Kostka is the director of the Allied Museum and has been working there for the past 23 years. The young reporters from the Böser Wolf (Big bad wolf) talked to him. The main focus was the story of the Berlin Airlift, which took place in 1948/49. 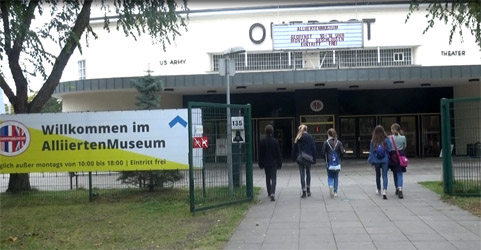 About the Allied Museum

The Allied Museum was created in January 1994, 8 months before the Allied withdrawal from Berlin. It was founded by four countries. The USA, the United Kingdom and France provided all their material in 1994. The fourth country was the Federal Republic of Germany, which is now carrying the museum on its own.

What were these buildings used for before?
The Allied Museum is housed in two buildings: 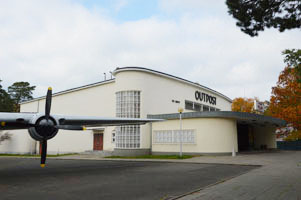 The Outpost Theatre was built in 1952/53. It offered live music and plays as well as movies. Near the stage there is a real orchestra pit where the musicians used to sit.
The Major Arthur D. Nicholson Memorial Library was built in 1979. With about 25,000 volumes, it was the U.S. armed forces’ largest library in Berlin. The Americans, the civilian staff, the families, the students - the American school was on the opposite side of the street - could borrow books there.

Is the plane out there a real raisin bomber?
Yes, it's a Hastings TG 503. Few airplanes from the time of the Berlin Airlift still exist today. The last time the Hastings flew was in 1977. Then it stood in the Berliner district Gatow for many years as a “Gate Guard“ at the British military airbase. In 1997 the British government and the Royal Air Force donated it to the Allied Museum.

How did this big plane get on the site?
The Americans, the British and the French were asked in 1997 if they had a helicopter big enough to carry the Hastings here. Since they did not have one, we had to hire the world's biggest transport helicopter, a Russian MI-2. This helicopter was bigger than the Hastings, so it was very costly.

Why is there a train? 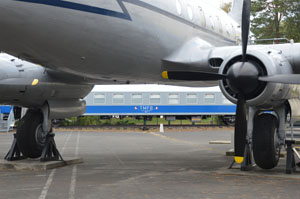 It is a French military train, TMFB, Train Militaire Français de Berlin. The French train connected Berlin-Tegel to Strasbourg about three times a week, except during the blockade: no train could drive then. There were also a British and an American train. These trains transported soldiers and their family members through the German Democratic Republic (GDR). The Allied made use of their right to ride the railways through the GDR. Therefore the trains drove even if they were not fully booked.

The history of the Allied in Berlin
The museum shows the history of the Western powers’ presence from 1945 to 1994.
The special situation of Berlin only worked out because of the Four-Power-Agreement. The Four-Power Authorities - the United States, the United Kingdom, the Soviet Union and France - split up the work and cooperated.
The first part of the exhibition in the former American Outpost movie theatre explores the years 1945 to 1950. The topics are the Allied victory at the end of World War II, the first years of the occupation and the process of democratic renewal. The main focus lays on the Berlin Airlift during the Soviet blockade of 1948/49. 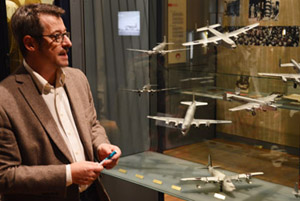 The Americans completely supplied the French sector because in 1948 the French needed their air force for a military conflict in Indochina (currently Vietnam, Laos and Cambodia). That's why they could not participate in the airlift logistically. But the French presence in Berlin was important to keep the Four-Power Status. They shared both the area and the political work.
The Tegel airport was built in the French sector in addition to Tempelhof in the US sector and Gatow in the UK sector. This third airport was absolutely necessary. It was built in 1948 in a record time of 3 months.
West Berlin was supplied, but it had to pay for the goods. The bread, the flour, the coal ... everything that was flown in were not gifts. Only the extremely expensive transport was assumed by the Allies. The goods were distributed in food rations by the grocery. Families in need additionally received CARE packages.

The film shown at the museum: When was the film that is shown in the museum made?  And when did people watch it when there was only 2 hours of electricity a day?
The film was made during the Airlift period, so around 1948/49. You can see the planes steadily taking off and landing. People could only watch the movie in the cinema, there were no televisions. It was part of the news that were shown before the display of a movie. The film primarily was supposed to show the catastrophic situation of West-Berlin to the people in West Germany and to preserve the help for Berlin. 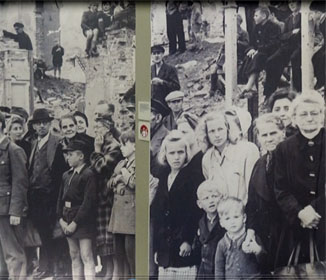 How did the children endure living in poverty?
The children belonged to the war generation, 3 years earlier the war was still raging. They were not used to luxury. It was the same for the adults. From today's point of view, it is hard to imagine, but for people then the shock was not that huge.

In the Airlift plane 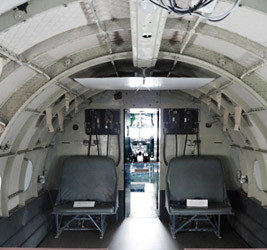 We are sitting here in the original raisin bomber; you can still smell the old oil. The windows must be renewed regularly. They are very thin. Every screw, every window is handmade. The use and restoration of this aircraft require huge expenses.
The Airlift plane is open to individual visitors on Sundays from April to October. Inside the aircraft you can see historical film footage of the Berlin Airlift.

The name raisin bomber is misleading. The bombers did not primarily carry food during the Airlift, but coal (almost 66%). We always think of food first, but a city needs energy too.
The planes flew back with passengers, because the people were stuck in Berlin. Many of them were not Berliners. There were also children (between ten and twenty thousand) sent to relatives in West Germany. Flights back to Berlin did not exist. Nobody knew how long the blockade would last. So it was not easy for parents to let their children go to West Germany without knowing when they would see each other again. They thought that the children would be fed better there and that it would make fewer mouths to feed in Berlin.
Pilot Gail Halverson started dropping chocolates off the plane. But he did not drop them - as many assume - from his pilot seat, because they would have landed in engines or propellers. He dropped them from a window behind the engines. After six, seven months, he was transferred and others took over his work.

What the Bad Wolves liked about it:

The museum displays many different everyday objects. It makes it easier to imagine how people lived, dressed, how they became inventive because of the lack of everything, also how the press reported events or how goods were delivered, what CARE packages contained...

The short films from that period showed us how people lived in the middle of the ruins. Berlin seemed to be very alive despite its destruction. We could get a sense of the daily life with this constant noise of aircraft and poverty.
The museum has the right size. There is not too much information, but enough to stay attentive.

The structure is well-arranged. It is nice that the museum is located in an old theatre that is in a place that used to be filled with life. The two bridges over the former orchestra pit do not only allow access for wheelchair users or strollers, but they also convey the idea of a bridge and the airlift. The decor with the old magazines, the coal bags, the silhouettes of the soldiers who frame the windows make the atmosphere pleasant. 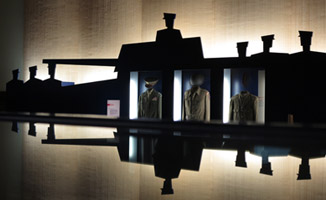 We also liked that the Allied Museum itself is located in the center of the former American Sector. American families used to live around here. It's exciting to visit a very well-preserved raisin bomber and to see a military train.
Our special thanks go to Mr. von Kostka: he explained a lot of interesting things in an understandable way. We could feel his enthusiasm. It was great to talk with him about the Airlift period sitting in a raisin bomber.